To share your memory on the wall of Lloyd Haugerud, sign in using one of the following options:

Funeral Service will be live streamed. To watch the service, please Click Here

Funeral Service will be live streamed. To watch the service, please Click Here

Lloyd was born to Elmer and Astrid Haugerud in Kinistino. He grew up with his 4 siblings: Elsie, Dale, Allan and Elaine. They farmed in Kinistino until 1954, Lloyd then moved to his present farmhouse in Brockington. Lloyd attended Pine Bluff school until grade 8 when he had to help on the farm with his dad. At age 16, Lloyd got a job at Saskhighways after he told the government he was a few years older than he really was. He was a foreman for his crew, he worked up in the bush for many years with his cousin, Earl. Lloyds next-door neighbor in Brockington was Connie. Connie was the love of his life, so
they got married on September 2nd, 1972. Connie and Lloyd lived at Connies grandparents and had their first-born son, Brent in 1973. They took over the Haugerud family farm prior to having their second son, Kevin in 1976. Lloyd had a mixed farm of grain and livestock, he loved what he did. All his cows had names and were more of pets than livestock. He had cows, horses, llamas, donkeys, sheep, goats, chickens, ducks, pigs and even a pet Elk. Lloyd enjoyed being in the bush, he even bulit this own sawmill. Lloyd and Connie had first baby girl, Amanda, in 1981. Lloyd took on many jobs throughout the years. He built dugouts, cut ski hills for wapiti, built the bridge on highway 6 to wapiti, blasted dams with dynamite, blasted a channel through Qu’appelle Valley, blown concrete from elevators, and helped move an elevator. Lloyd was very mechanically inclined, he worked on many gas engines while farming, logging, and trucking. Trucking was his passion. In 2002, Lloyd went back to school and received his grade 12. He then attended Cumberland college and got his welding certificate and his 1A license. He was a proud trucker. He retired from farming land, he kept his livestock and went on the road. He worked for Ridgedale transport, then M&K welding hauling hoppers. Kevin and Amanda stared working with Lloyd at M&K driving pilot truck for their dad. M&K was sold so Lloyd started trucking for nearby farmers. He worked along side Kevin at the Shmyrs farm, but he would take off seasons to drive bus for Hodgins. Fortunately, Hodgins let him take his family on the vacation trips to whitefish, Montana and Golden, BC several times. Going on bus trips gave Lloyd a taste of travelling, making it easy to convince him to come on all Amandas road trips to Vegas, California, and on cruises. His granddaughter, Kayla,also took Lloyd and Connie to Banff last winter, where they took a helicopter through the mountains,
and went to a wolf sanctuary. Last year we made a large family vacation to Shuswap, BC where both Amanda and Kevins family joined together on a houseboat tour for a week, Lloyd had the time of his life having almost everyone together on the boat.

Lloyd was a hard worker, working his whole life but he always had time for his family. He loved his family very much and had a soft spot for his grandchildren. He would joke around and tease his wife, kids and grandkids all the time. Lloyd was the best husband, father, and grandfather that anyone could ever ask for. He was strong, loving, kind and so generous. He will be missed by all.

To send flowers to the family or plant a tree in memory of Lloyd Elmer Haugerud, please visit our Heartfelt Sympathies Store.

Receive notifications about information and event scheduling for Lloyd

We encourage you to share your most beloved memories of Lloyd here, so that the family and other loved ones can always see it. You can upload cherished photographs, or share your favorite stories, and can even comment on those shared by others.

Posted May 06, 2021 at 11:51am
To Amanda and family
Very sorry to hear of the passing of your dad, I did not know him but he sounds like a very loving hardworking adventurous man! Sending big hugs and love your way at this very sad time!
Comment Share
Share via:
B

Posted May 05, 2021 at 05:38pm
Sorry for your loss, I wish I could be there to hug you all. Our thoughts and prayers are with you all.
Comment Share
Share via:
HS

Posted May 03, 2021 at 12:32pm
Thinking of you and your children Connie.So sorry!From your childhood friend. Genny and Larry Vancoughnett

Flowers were purchased and a memorial tree planted for the family of Lloyd Haugerud. Send Flowers 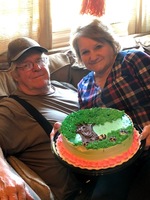 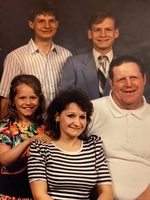 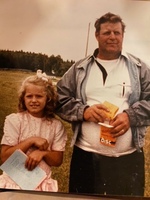