To share your memory on the wall of Lianne Pelletier, sign in using one of the following options:

Print
It is in loving memory that we celebrate the life of Lianne Carol Pelletier (Taylor). Lianne passed away in her husbands arms on December 21, 2020 in Saskatoon, Sk. after a lengthy illness.

Lianne was born on March 15, 1964, in Melfort S... Read More
It is in loving memory that we celebrate the life of Lianne Carol Pelletier (Taylor). Lianne passed away in her husbands arms on December 21, 2020 in Saskatoon, Sk. after a lengthy illness.

Lianne was born on March 15, 1964, in Melfort Saskatchewan. She was last of six children to John (Jack) and Patricia (Pat) Taylor. She had her first child, Kendra, in 1980. Her son, Darcy, was born in 1985. She lived in Melfort until 1987, when her and the kids moved to Surrey B.C. to be with Perry who had just joined the RCMP. On November 14th of that year, her and Perry married at a small ceremony with close friends. Their third child,Tamara, was born in 1990.

Lianne and family stayed in Surrey for 10 years, making many friends and memories. In 1997, the family moved back to Saskatchewan when Perry got transferred to Foam Lake. After 9 years making friends and more memories, they moved to Swift Current in 2006. In 2007, Perry and Lianne transferred to Ponteix and in 2010 to Green Lake before they returned back to Swift Current in 2014. They resided there until Lianne passed away.

Over the years she had worked various jobs. She worked in retail, bar tending, waitressing, reception, and was the manager of a grocery store meat department. Her biggest joys were her grandchildren, children and husband. They meant the world to her. She enjoyed playing Yahtzee, crib, board games, anything with family or friends.

Her favourite hobbies included knitting, crochet, plants and her love for animals of all kinds. She loved being with her grandchildren. Whether it was watching them play sports, or dance or just hanging out with them. She was always there for them. She was proud of her children and loved them dearly and loved her husband with all her heart.

Friends so wishing may make a memorial contribution to so at your local S.P.C.A in her honour.

She will be greatly missed by all who knew and loved her.
Read Less

To send flowers to the family or plant a tree in memory of Lianne Carol Pelletier (Taylor), please visit our Heartfelt Sympathies Store.

Receive notifications about information and event scheduling for Lianne

We encourage you to share your most beloved memories of Lianne here, so that the family and other loved ones can always see it. You can upload cherished photographs, or share your favorite stories, and can even comment on those shared by others.

Guaranteed hand delivery by a local florist
AM

Posted Jan 01, 2021 at 02:17pm
Lianne brought so much fun and laughter into our lives, She taught me how to do cross-stitch. I think I lived more at her apartment than my own.

Posted Dec 27, 2020 at 03:13pm
We are so sorry to hear of Lianne’s passing. Know that you are all in our prayers. Garth and Jenn Bauer
Comment Share
Share via:
B

I am so sorry to hear of my cousin Lianne’s passing. My deepest condolences Perry to you and your family. Although it has been a long time since we saw each other I have fond memories of my youngest cousin. Also to Gary, Judy and Donny. Love and prayers Betty Lynne 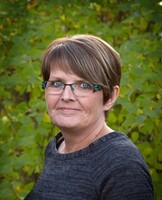