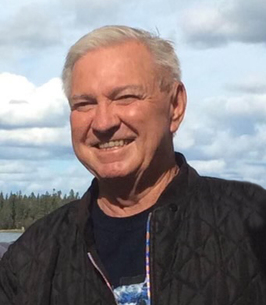 Clint was born on February 27, 1952, in Shellbrook, Saskatchewan to Ernest and Eileen Mason. He grew up on the family farm in the Cameo/Hilldrop area. Their family farm was very close to his grandparents, aunts, uncles, cousins, and close friends. He loved being raised on the farm. He helped with many chores. He loved having a close family. They spent a lot of time together at birthdays, community dances and family celebrations. Clint attended Hilldrop School for grade 1. He then went to school in Shellbrook from grades 2 – 12. During his school years he played football and baseball. He worked for farmers and had a part time job at Rocky’s Husky Service. In 1969-1971 he attended Saskatchewan Technical Institute in Moose Jaw and graduated with a Radio-TV & Communications Servicing Certificate. He started dating Gloria Lovberg in September 1969. In 1971 he went to work for Houle Electric and Furniture in Prince Albert. In 1972 he started working for George Laberge in Shellbrook. Clint and Gloria were married in Shellbrook on August 11, 1973. They lived in a mobile home in Grandpa Mason’s farm yard until they moved to Canwood in 1974. In 1975 Clint and Gloria bought The Drug Store and radio-television repair shop from Bill Wilcox. Clint fixed radios, televisions, and installed satellite systems. They had their first son, Christopher, on May 22, 1975. They had their second son, Paul, on September 2, 1976. They also opened a laundromat in Canwood. Clint spent many years coaching and playing softball and hockey during that time. Clint started working for Mutual Life In 1988 and they moved to Prince Albert, Saskatchewan in 1989. He enjoyed watching his boys’ sports and volunteering for various organizations. They then moved to Melfort, Saskatchewan in 1998 and have lived there ever since. He was a board member for the Chamber of Commerce and the Melfort Mustangs during his time in Melfort. He enjoyed spending time with family and friends whenever possible. He loved camping and then their cabin at Memorial Lake. He had a lot of fun hunting, fishing, and golfing. Clint loved his work and extended family at Sun Life. They enjoyed many conventions with Sun Life and vacations with family. Puerto Vallarta was his favorite holiday destination. Clint loved his children and grandchildren. The love of his life was Gloria and they spent most of their time together.

Clint loved spending time with his extended family and friends. He cherished his children and grandchildren.