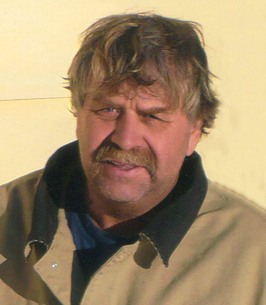 Darwin was born in Melfort to Leonard and Irene Bowman on July 26, 1955

Darwin grew up on the family farm taking grade 1–3 at Clapton School and finished his grade 12 in Melfort.

After finishing his schooling, he continued to help on the family farm South of Fairy Glen. Darwin also did logging and carpentry, and also worked for CP Rail, the Melfort Research Station and Melfort Ag Society.

Darwin was a people magnet. He was always there for everyone; young and old. He enjoyed growing up on the farm, playing ice hockey on the ponds, wrestling ring and football in the pasture and baseball by the bins. He loved hunting, fishing and taking people for rides in his convertible.

Some pleasant memories were playing hockey with the Bears in Gronlid; you can see pictures hanging in the Bears Den.

Darwin lived in Tisdale, moved to Melfort and in 2004 moved back to the farm to take over the homestead. He loved his (dogs) companions.

His friends were very important to him and they are to numerous to mention.

Darwin was predeceased by: his grandparents, his parents: Leonard and Irene and brothers: Keith and Lance.

Our kids were his kids

Thank you to all his friends for your messages during his stay in the hospital. They were all read to him.

The family kindly asks that all those attending Darwin's Service, please wear a face mask.