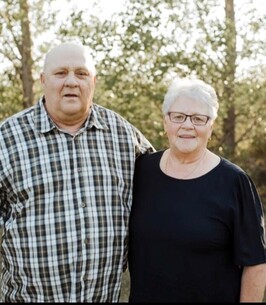 After years of battling COPD, Dad passed away surrounded by his loved ones on August 8, 2022

Dad was known for his rebellious spirit while growing up in Carrot River. The stories of him and his sister Pat sneaking to the barn to test the moonshine always made me giggle. He survived his wild child days and at 15 moved to Melfort where he later married Diane Carrie Skiftun and had 2 daughters, Leanne and Shauna.

After 27 years of service at the Melfort Hospital, he decided to take an early retirement to enjoy fishing and his grandchildren.

Fishing and camping were always in abundance and the challenge to get the biggest fish was always top of Dad’s mind. He loved to win whether it was catching the biggest fish or an intense game of whist. If he was on the losing end, his Riders’ hat was flying and the blood pressure was rising! It was pure entertainment to watch.

His grandchildren were the highlight of his life, he was always ready for tea parties, fishing, or cuddles with a book and “Papa’s” taxi service was always the first one there.

Lower Fishing Lake was his second home. I’ll never forget the day that an 18 lb jack fish bit my hook, I nearly flew into the water with the fish! Thankfully Dad was beside me, and together we caught our biggest fish ever.
- Shauna

Or when dad was laying in the camper with his broken leg and Auntie Bernice got a bloodsucker on her leg. Bernice ran 1mile long sprint in about 15 seconds and hopped into bed with dad, with her leg in the air hollering “get it off, get it off”.
- Shauna and Leanne


Memorial donations may be made to a charity of one's choice