To share your memory on the wall of Bruce Stephen, sign in using one of the following options:

He was very young when he met the love of his life. He was six and she was five. Even though she was sweet and adorable he did not realize it until six years later when she pushed him into the creek and he literally fell for her. They were married on December 11, 1971. They spent 12 years living on a farm north of Weldon before moving to Kinistino where they have resided ever since. Together they raised two daughters. Through the years he had many different jobs; farmer, mechanic, salesman, and production foreman. In December they would have celebrated their 49th anniversary. They had a wonderful life together filled with beautiful memories. They loved their winter vacations and spending time with their grandchildren.

Bruce was a loving husband, father, grandfather and friend. He would do anything for his family. If you knew him, you would know what his passion was. Stranger, friend or family it didn’t take long for golf to become part of his conversation. His faith was also very important to him and he used his God-given talent to play the guitar to serve in the church.

Over the years he has struggled with health issues. This last year was incredibly difficult. In March he took a turn for the worse. He was in and out of the hospital and due to COVID-19, and our failing health system he did not get the help he needed. This took a toll on his mental health.

Bruce passed away on October 22, 2020. His struggles are over and he is at peace in the arms of Jesus. He is predeceased by his mother (Doris Stephen), two brothers-in-law (Rick Hudey, Roger Plato), and niece (Jessica Stephen).

He is survived by his loving wife Donna; his children: Kerry (Charles), Shauna (Jayme); 13 grandchildren and their significant others; two great grandchildren (and one more on the way); his father Roy Stephen; his siblings: Debra (Calvin), Gail (Tim), Mark (Treena), Blair (Della), and Greg (Tracy); nieces, nephews and friends.

A Private Family Funeral Service will be held.

Friends so wishing may make memorial contributions to the Heart & Stroke Foundation of Saskatchewan, or to the Kinistino Health Care Auxiliary.
Read Less

To send flowers to the family or plant a tree in memory of Bruce Roy Stephen, please visit our Heartfelt Sympathies Store.

Receive notifications about information and event scheduling for Bruce

Print
A Private Family Service will be held.

We encourage you to share your most beloved memories of Bruce here, so that the family and other loved ones can always see it. You can upload cherished photographs, or share your favorite stories, and can even comment on those shared by others.

Bunny, Gloria and family. and Carrie Dawn, Ray and Family sent flowers to the family of Bruce Roy Stephen.
Show you care by sending flowers

Posted Oct 25, 2020 at 12:06pm
Donna, girls and family, I am so sorry for your loss. May you all find comfort in the arms of God and may he hold you up at this time of sorrow. I remember when I would visit dad in the nursing home and he would see Bruce there visiting his mom and dad would always say..see that guy over there I hired him at the Co-op. What I remember growing up and seeing Bruce at the Co-op he was a quiet, gentle man with a great smile. Hugs to the whole family and Donna my little dog Abi sends hugs to you.
Comment Share
Share via:
NM

Posted Oct 25, 2020 at 09:22am
Bruce was a great person. A man of courage. Strength. Wisdom. A tremendous auto mechanic. And so many more gifts and achievements. Bruce will be missed. My prayers are with all family and friends.
Comment Share
Share via:
CF 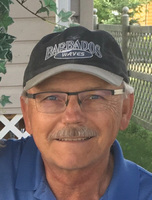